Ocilla, the county seat of Irwin County, was incorporated as a Georgia city on November 24, 1897.  The name Ocilla is a version of an old Native American name, “Osceola.” It is believed that Ocilla was named for Chief Osceola of the Seminole Tribe, who settled in this part of the state.

As the only incorporated municipality, Ocilla serves as the hub for government and commercial activity in Irwin County, which has a rich history as an agricultural community and the economy is still very heavily based in agriculture.  Ocilla is known for two community festivals, one with more than 60 year history and one more recent edition to our community celebrations.

The Annual Georgia Sweet Potato Festival is held the last Saturday of October in Ocilla, and for decades it has served as a tribute to our agricultural heritage as we honor our local farmers. Ocilla now has another annual event celebrating our homegrown talent Dave Prater of the Hall of Fame R&B duo Sam & Dave.  The Prater Music Fest is held in early May each year.

Whether it’s for a visit during one of our festivals or other local events, to visit friends or family, or even to look for a new place to call home; we hope to see you in Ocilla real soon.

You’re welcome to come to Ocilla…anytime. 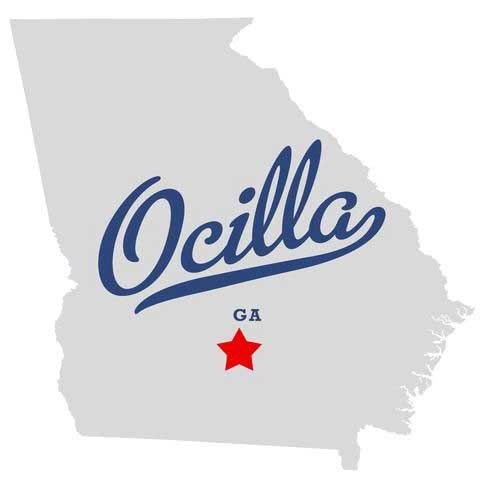 “ The City of Ocilla has recently become aware of a fraudulent DOXO account. The City of Ocilla has not created this account and no monies or payments made to it provide credit for any bill due to the city. We are working with State and Local Law-Enforcement to have the site disabled and to charge, as well as, prosecute those responsible to the fullest extent of the law. To be concise the City of Ocilla DOES NOT have a DOXO ACCOUNT ALLOWING PAYMENT OF BILLS DUE TO THE CITY.”